Another specific form of Blepharitis is attributed to a bacteria called Moraxella that are frequently harboured on the mucus membranes of many mammals including us. They have been regarded as a normal inhabitant of our nose and pharynx. However, more recently, Moraxella have been implicated in causing respiratory complaints, conjunctivitis and some corneal infections as well.  They tend to colonise children to a greater extent than adults and yet older adults are much more likely to develop blepharitis so there are plenty of contradictions. 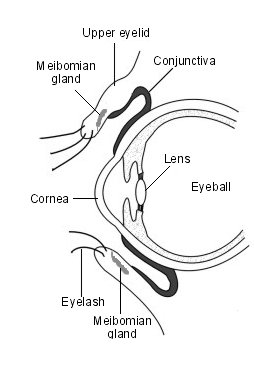 Moraxella along with Demodex mites and the thousands of other invisible inhabitants of our skin and intestines are not usually a problem.  They are in fact in many ways instrumental in maintaining the health of your skin and gut. The problems begin when these microbiomes get out of balance.

An imbalance can occur when we get run down, under stress, have dietary problems or even a lack of sleep over time. This is when we become vulnerable to such things as Blepharitis.

You may have been told that you have Blepharitis however since there can be many different factor that bring on blepharitis so unless you have actually had skin swabs or tissue samples taken and analysed it is virtually impossible whether the cause is bacterial, fungal, demodex or some other condition that is responsible for your blepharitis.

I have had a number of people tell me that they have been diagnosed as having blepharitis but no tissue samples or swabs have been taken.  Their condition could have just as easily been caused by Demodex mites or other infection.  Blepharitis has many causes and it does not pay to be too hasty to put a label on it and risking an inappropriate course of treatment.

BlephroClear has been formulated to directly tackle the three most frequent causes of blepharitis and provide symptomatic relief for all.  This is achieved with a healing and cleansing regimen that clears away the flaking and excess sebum, applies ingredients that inhibit the growth of bacteria, mites and fungal infestations and supplies nutrients to assist in normalizing the skin around the rim of the eyelids.