At Last… a way to free yourself from the discomfort, embarrassment and frustration of blepharitis.

At Last… a way to free yourself from
the discomfort, embarrassment and
frustration of blepharitis.

HelloI’m, a programmer and trader.  Five years ago blepharitis nearly ended my career and badly affected my social life.

The stinging gritty eyes and tearing made it very hard to work. I also began to avoid meeting new people because of the appearance of my eyes.

I saw several eye doctors who told me there was no cure for blepharitis.  Also, the things they suggested to relieve the symptoms were not much help.

There didn’t seem to be any real answer to the problem. Fortunately I refused to accept that.

After 2 years of research and testing I am happy to tell you that there is an answer. I and others who have used my formula are now symptom free.

BlephroClear is a made from natural oils, vitamin extracts and other active ingredients that improve skin health.  Other ingredients used protect against micro organisms and fungal infections.
There are many different factors leading to the development and persistence of blepharitis.  BlephroClear treats the discomfort and visible symptoms of many forms of blepharitis.
Using BlephroClear is simple.  Apply and rinse it off twice per day, morning and night. One bottle is enough for at least 60 days when used correctly.
Ingredients have been researched to minimise the chance of an allergic reaction.  To ensure they suitable for you, please check the list of ingredients on the product page. 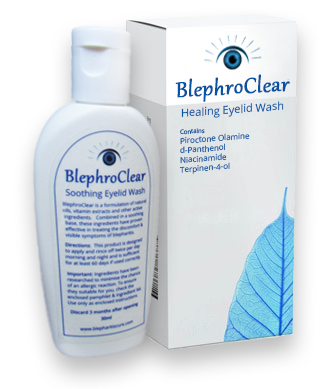 What do our customers say?
Hold cursor over customer comments to pause slider

Hi Raoul - well it's coming up to 2.5 years since I discovered and have been using your product (time flies). With diligent use I have not had a flare up since December 2017 (I remember it!), no pain, no awful weeping eyes, no grittiness and no ugly red red eyes.  Wearing make-up every day including mascara. Thank you.

This has been a god send

Hello Raoul I would like to take the opportunity to thank you for such a wonderful product. I have been a blepharitis sufferer for the past six years. This has been a god send from the first application itself. Please do update me when you launch any new product . Thanking you once again Yours sincerely

Every day things are getting better

Hi Raoul, Thank you so much for keeping in touch it really helps to know that you are concerned about my progress. All the doctors have done is given me things that just made matters much worse and don't seem to care.... Every day things are getting better and that gives me so much hope.. Thank you thank you again for making bleproclear. I will keep in touch and thank you too for enlarging the print.. You are an Angel. Warm Hugs Katie

Thanks again so much for your product – it’s an absolute lifesaver! Except for a flare up around New Year (because I wasn’t so vigilant with Blephroclear) I have now been pretty much clear of the insidious blepharitis for nearly 12 months!!!!! yayyyyyy. It’s so easy to use and I’ve just been applying once a day with my evening shower – now part of my daily routine!  I’ve even been able to almost completely reduce my reliance on eye drops J. You have a customer for life!

Far better than any other product I have tried

Thanks for the update about my order.  Whilst the blepharitis hasn't completely gone (and I didn't expect it to), the relief I get  from your product is  far better than any other product I have tried - and I have tried lots prior to finding out about Blephroclear. Cheers

Amazing product that actually works – so glad I found it!

I cannot thank you enough for your wonderful product – I am now 15 days into its use and am clear of the symptoms of Blepharitis.  I’m amazed at how quickly it works!  I’ve even started using eye make-up again. Amazing product that actually works – so glad I found it! Regards

Its so good to find something that actually fricken works!

The gel works really well to thanks my eyes are improving each day I use it. The rims of my eyes are less inflamed and my glands of my eyelids are less blocked so my eyes are more oily and less red and sore! Its so good to find something that actually fricken works. Thanks a lot, Josh.

Thanks for your email. The reason I ordered again so soon was a cousin of mine has blepharitis as well and when he saw how I was going he took the rest of mine. It works really well thanks, I'm a happy man.

Hello Raoul, I just wanted to write and thank you for sharing your blepharitis treatment, it has been a godsend.   I have suffered with blepharitis for many years.  Most treatments I have tried were very expensive and my condition required using them daily so it was costing me a fortune.  I am now on my second bottle of Blephroclear and the bad days are getting further and further apart. What I was paying for twelve days is now giving me three months so that is a little relief for my husband as well. Thank you again.

Hi I have had angular blepharitis for 3 years and it has pretty much dominated my life.  I have only been using Blephroclear for 4 weeks and my eyes are so much better in the morning already.

WHY SHOULD YOU TRY BLEPHROCLEAR?

Unless you are already on some treatment or regimen that is helping your condition, it is only likely to get worse.

So take advantage of my risk free 100% money back guarantee and try it for yourself.

Manage Cookie Consent
To provide the best experiences, we use technologies like cookies to store and/or access device information. Consenting to these technologies will allow us to process data such as browsing behavior or unique IDs on this site. Not consenting or withdrawing consent, may adversely affect certain features and functions.
Manage options Manage services Manage vendors Read more about these purposes
View preferences
{title} {title} {title}