How I Cured My Blepharitis

Blepharitis… that ugly uncomfortable and embarrassing 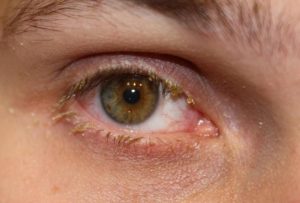 Let me tell you my story, or should I say my journey which does, eventually, have a happy conclusion.

About five years ago I was doing quite a lot of work on a computer and I started having trouble with my eyes stinging.  The constant burning and watering eyes were extremely frustrating and made it very difficult to concentrate. At this time I had never heard of blepharitis.

Foolishly I tried to ignore it thinking it was just caused by too much time in front of a computer screen and that it would stop when the project I was spending so much time on was finished.  Unfortunately that was not the case, it got progressively worse.

Time to see the Doctor

I woke every morning with matted eyelashes and even after cleaning, during the day I could see in the mirror that the dry flakes all around my eyelashes were steadily getting worse.  It was impossible to read without tears constantly interfering with my vision.

After a succession of consultations with various doctors and specialists and no change in my condition all I had was a name for it.  Having a name did not fix anything, but it did give me the possibility of doing my own research.

I tried various things that were recommended to wash away the flaking including baby shampoos, hot compresses and many other things that I found but the relief they provided was at best very temporary.

By this time my eyelids were starting to look swollen and ugly and my eyes were frequent had bloodshot as well.

A scary glimpse into the future

It was around the time my project finished that I was introduced to an older gentleman and what I saw when I looked at him it really scared me, his eyes were a mess and he was obviously suffering from fairly advanced blepharitis as well.  Now I was really concerned, was this how I was going to end up.

I knew it was a bit rude to enquire about his very unsightly eye condition but I felt I had to know more.  To my relief Brent had also noticed my eyes and was very willing to discuss the problem with me.

Time to get really serious

Brent, the gentleman I met had done the rounds for years looking for an answer to his severe blepharitis, and hearing what he had tried made me realize that if I was going to find an answer I had to stop looking for a cure for blepharitis that was already out there and start my own research.

I began by researching the science and medical information that was available on similar types of problems to blepharitis.  I researched a mountain of data on herbal medicines and spoke with specialists in this field including a Chinese herbalist and a nutritionist.   I also looked for any answers in historic information and I can tell you that some of the ancient “remedies” were terrifying so I abandon that pretty quickly.

From Theory to Practice

Having developed several ideas on what might work I then had to research for potential side-effects of any of the ingredients individually and in combination, this resulted in a few being discarded but a much clearer picture of what was needed.

The next major hurdle was how to try the treatments out, where to source the ingredients, what percentages of each to use and so on.  Some I could obtain locally in sufficiently small quantities but a number of the components I wanted to try were either not available or were only supplied in huge quantities. This interrupted progress for a while but while overseas I met with a chemist from a small pharmaceutical company who agreed to provide me with small quantities of the ingredients I was seeking and also advise me on the typical quantities used for various applications and the processes for combining them.

Back home and the testing began.  Fortunately I had a Guinea Pig to test things on… Me.

Well after several disappointments and a couple of rounds of very sore eyes which stopped me testing for a month I started to see some glimmer of hope.  The first sign was being able to open my eyes in the morning without having to bathe them first, still not pretty but definitely improving.  Then by varying quantities a little and including two additional ingredients I noticed that the flaking was starting to disappear.

I kept using the cream every second day for a while and was scared to stop in case the symptoms came back.  After remaining clear for a month I was getting more confident so I started increasing the time between applications graduating from once per week to once a month then longer.

I have gone as long as five months without any symptoms but I have noticed that a succession of very late nights or eyestrain can start some minor flaking and soreness. However, this was quickly fixed by a few applications and a little more sleep.

There are a few other actions I have taken and a small cleaning brush I use that have greatly assisted when used in conjunction with the BlephroClear cream I have developed.

Brent the gentleman I met that really spurred me into action is also happily free of symptoms along with several others that I found on the internet who were prepared to give it a try.  It is their success that has encouraged me to make this available to other blepharitis sufferers.

While I accept that there may be no complete cure for blepharitis and what I have developed may not work for everyone, the disorder, curable or not, is unlikely to damage eyesight so it is all about the symptoms, so being free of the discomfort and the disgusting appearance of blepharitis is good enough for me.